The importance of pedigree analysis in breeding

The Inbreeding Coefficient (IC) or Coefficient of Inbreeding (COI) or Coefficient of Kinship is the relationship of the parents of the individual. It is defined as the probability that the two genes this individual has in a locus are identical by descent, i.e., they are both inherited from a common ancestor. The calculation of the inbreeding coefficient is done up to a given pedigree depth (number of generations): the greater the depth of the pedigree, the greater the chance of finding new common ancestors, and the higher the inbreeding coefficient.

The Breed Archive allows you to choose from one to ten generations. We have chosen seven generations as the default setting — on the one hand, this is accurate enough and, on the other, fast enough, and there is a good chance that a large percentage of the pedigrees will be complete for that number of generations.

A dog receives a high COI if the same ancestors appear on both the sire and dam side. You can have a low COI for an offspring even in cases where both parents have high COIs - if sire and dam do not share the same ancestors, the offspring won't have a high COI. Therefore it is also important to have a look at the ancestor loss to get an idea of the genetic diversity of a particular dog or a planned litter.

The partial inbreeding coefficients, Fij, measure the probability that the alleles at an arbitrary locus in individual i are identical by descent and that the alleles were derived from an allele in founder j. The partial inbreeding coefficients of the ancestors of an individual can be seen as their "contribution" to this individual’s COI, i.e., in a full pedigree the sum of all partial COIs of all ancestors of the individual must equal the individual’s COI!

It is important to note that if the dog’s pedigree is incomplete you won’t get reliable numbers for either the COI or the ancestor loss for generations higher than the last complete generation!

Blood quota is the percentage of a pedigree that is made up by any one ancestor. Sire and dam, obviously, each make up 50% of a pedigree; grandsires and granddams 25%; great-grandparents contribute 12.5%, etc.

Why pedigree analysis is important

On each dog’s entry in the Breed Archive you will find a link to its pedigree analysis page. The pedigree analysis currently provides information about the coefficient of inbreeding (COI), the ancestor loss and the list of ancestors with their blood quota. The partial COI calculation is available only up to the 5th generation. 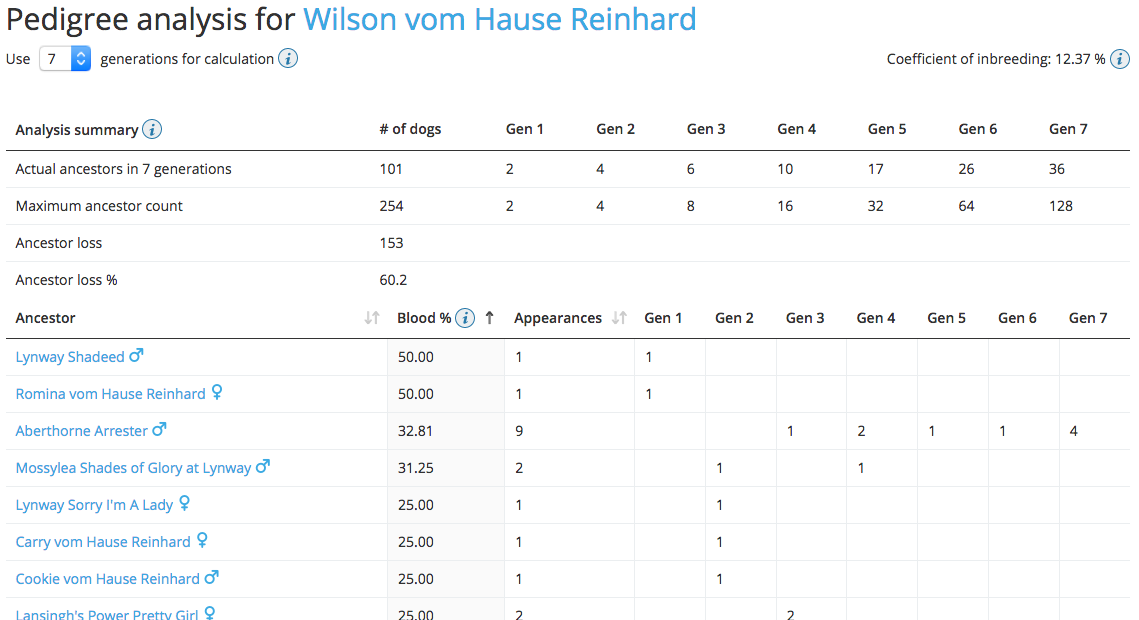 It is important to mention that measures like the coefficient of inbreeding or the ancestor loss are not the only ways to measure genetic diversity. Analysis of mitochondrial and microsatellite DNA are becoming increasingly popular. While measures like the COI are mathematical formulas, calculating probabilities that do not necessarily apply 100% for a particular dog (all litter mates have the same COI), the DNA analysis reveals actual diversity, i.e., with DNA analysis genetic diversity of litter siblings can vary.

A puppy moves in
Check out our new look!
Cancel
Cookie settings
Accept all